Did your retirement plan advisor (“RPA”) provide you with a fee benchmarking report to justify the “reasonableness” of the investment advisory fees that your retirement plan is paying? These fee benchmarking reports are a by-product of the new final 408(b)(2) regulations and are typically being produced by the RPA in an effort to provide the responsible plan fiduciary (“RPF”) with documentation that the plan is paying a “reasonable” fee to the advisor.

Unfortunately, these fee benchmarking reports have not been recognized by the courts. In fact, there is even a U.S. Supreme Court case that provides guidance into the process of determining the reasonableness of fees. Most importantly, the courts have basically disavowed the use of benchmarking in determining the reasonableness of an investment advisor’s fees.[1] Since these benchmarking reports might not be useful for their intended purpose, what else might they be inadvertently used for? In today’s litigious world, and depending upon what is documented in these reports, it’s easy to conclude that plaintiff’s bar or a regulator could use them as proof of a potential fiduciary breach and/or a prohibited transaction.

Let’s begin with the reasons why fee benchmarking has become a common tool within the retirement plan industry. The new final 408(b)(2) regulations clarify an obligation on the part of the RPF to examine all contractual relationships between its plan and a party in interest to determine both the necessity of the services being paid for with plan assets as well as the reasonableness of the amount paid for those services.

Because ERISA does not define the term “reasonable compensation” it is up to the RPF who approves a transaction (on behalf of the plan and its participants) to determine the “reasonableness” of the fees that are being paid.

At the same time, and due to the 408(b)(2) disclosure requirements, RPAs were obligated to provide the RPF with an annual statement not only showing the total compensation they received from plan assets, but also a list of the services being provided to the plan for the fees (or commissions) being paid to them. This new compensation disclosure requirement prompted RPAs to begin providing fee benchmarking reports in an effort to justify their compensation. The primary purpose of these fee benchmarking reports is to provide the RPF with a comparison of the fees being charged to their plan against similar retirement plans of similar asset size such that the RPF can then rely on these reports to satisfy their fiduciary responsibility of ensuring that only “reasonable” fees are being paid.

As mentioned earlier, 408(b)(2) also requires that a list of services is disclosed. In an effort to justify the fees that many RPAs had grown accustomed to receiving, many of these advisors opted to include everything they might have done previously (without direct compensation) as a “service” being provided by them to the plan. Unfortunately, many of the “services” that are typically being included in the fee benchmarking reports produced today may be problematic and could cause regulatory, legal and/or other troubles for the RPF and their plan.

The RPA’s primary function is to help the RPF select and monitor the investment options offered within the retirement plan. Secondarily, the RPA should help the RPF in providing investment education to plan participants.

In response, the typical RPA has added administrative and other non-investment services to their service model in an attempt to justify maintaining the compensation levels that they have enjoyed in the past. Unfortunately, these benchmarking reports may document services that are potentially problematic (see chart below.)

The Future of Retirement Plan Advice

We see a trend that will be challenging for many “old guard” RPAs. Let’s first agree that it should take roughly the same amount of time and effort for an advisor to deliver services to a plan with $50 million or with $10 million in assets under management (“AUM”). If this is true, why is an advisor paid a premium to service the larger plan? Many would argue that above certain levels of plan assets, having a compensation model based on AUM is antiquated and results in “unreasonable” compensation being paid to the RPA.

A flat fee arrangement that doesn’t require elaborate justification using benchmarking reports might not only result in lower investment advisory fees today, but it might also help the RPF avoid future headaches. 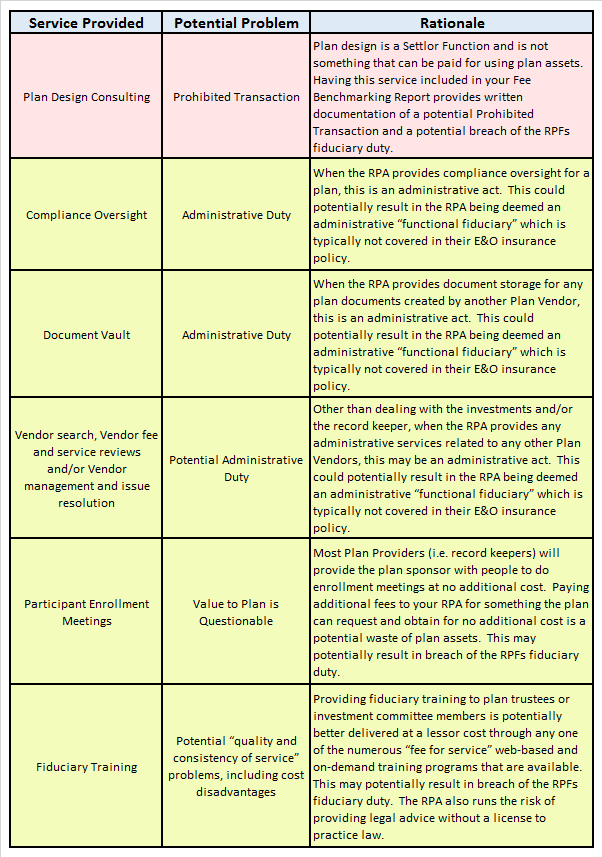 [1] See BFF Financial’s April 2017 Client Alert: “Is Your Retirement Plan Advisor Overcharging Your Plan?” for a more complete discussion of this topic.